In May 2019, drone whistleblower Daniel Everette Hale was arrested and indicted on allegations that he disclosed classified documents about the U.S. military’s assassination program, believed to have been the source material for a series in The Intercept called “The Drone Papers”. On March 31, 2021, Hale pleaded guilty to a single count under the Espionage Act, carrying a maximum sentence of 10 years. On July 27, 2021, Daniel was sentenced to 45 months in prison.

Hale is a veteran of the US Air Force. During his military service from 2009 to 2013, he participated in the US drone program, working with both the National Security Agency and the Joint Special Operations Task Force at the Bagram Air Base in Afghanistan. After leaving the Air Force, Hale became an outspoken opponent of the US targeted killings program, US foreign policy more generally, and a supporter of whistleblowers. He publicly spoke out at conferences, forums, and public panels. He was featured prominently in the award-winning documentary National Bird, a film about whistleblowers in the US drone program who suffered from moral injury and PTSD. Hale based his criticisms on his own participation in the drone program, which included helping to select targets based on faulty criteria and attacks on unarmed innocent civilians.

You can read his own words on the crisis of conscience that drove him, articulated poignantly in this letter to the Judge and his statement at sentencing.

Daniel is currently serving his sentence at USP Marion, in Illinois. His projected release date is July 5th, 2024. He is currently placed in the Communications Management Unit (CMU) within USP Marion. These units severely restrict and heavily monitor inmates communications and visitations. CMUs have been heavily criticized for their Kafkaesque violations of due process, and widespread religious and political profiling.

Daniel will be serving more than 3.5 years in prison for contacting the press about a matter of extreme public importance that has been shrouded in secrecy. But the larger concern is not what Hale did or didn’t do but what our government has been doing. For almost two decades, they have used a veil of secrecy to deny the American public the basic right to informed debate and consent. Government officials have repeatedly lied about nature and the extent of drone assassinations. No one has ever been held accountable for these lies, or for the war crimes they have enabled.

Daniel is a whistleblower who has enriched the public’s knowledge about matters of grave civic concern. It is unconscionable to use a law supposedly aimed at actual spies and saboteurs, against individuals who act in good faith to bring government misconduct to the attention of the public.

(2021-10-21):
Daniel is currently within the general population at USP Marion, but was placed into the Communications Management Unit (CMU) within that facility. This was a significant improvement in internal living conditions from his previous facilities, but CMUs severely limit and heavily monitor inmate communications, and have been heavily criticized for their Kafkaesque violations of due process, and widespread religious and political profiling.

(2021-10-04):
This weekend, Daniel was transferred away from Northern Neck Regional Jail and is in transit to his next destination. Until he is in a more long-term location, he asks that you do not send him any mail. He does not know when or where he will be transferred onwards, and will likely not be able to take anything with him. We will post updates and details as soon as the situation changes.

(2021-09-24):
Daniel's core support team has launched a GoFundMe to cover his prison expenses and create a welcome home fund to get him on his feet again upon release.

(2021-09-23):
We have posted the statement read by Daniel at his sentencing, recounting the crisis of conscience that led him to object to drone assassinations and the lies that sustain them.

(2021-08-06):
Daniel has been temporarily transferred to a different facility post-sentencing. Right now, he asks that you do not send him any mail. He does not know when he will be transferred onwards, and will likely not be able to take anything with him. We will post updates and details as soon as the situation changes.

(2021-07-23):
Read Daniel's letter to the Judge from his jail cell, explaining the crisis of conscience that drove his whistleblowing.

(2021-07-12):
The Council on American-Islamic Relations (CAIR) has asked to file a brief in support of Daniel Hale outlining how his disclosures of abusive and arbitrary terrorist watchlist systems helped numerous clients get off No-Fly lists.

(2021-05-31):
Daniel has been moved from quarantine to "administrative segregation" at the Alexandria Detention Center while he awaits sentencing. This represents a small improvement in conditions, with more rec time outside the cell, but he still is under restrictive lockdown conditions and lacks access to counseling, to minimal reading materials, and to news and information. Please continue to write letters and send printed news items, as detailed below.

(2021-05-24):
The government placed Daniel Hale in conditions of solitary confinement pre-sentencing because of "concerns" about his mental health. Last week, another inmate committed suicide at this same facility, the Alexandria Detention Center, where Chelsea Manning was also held at the time of her suicide attempt. Awaiting your sentence should not be a death penalty.

(2021-05-05):
On April 28th, Daniel was arrested for alleged parole violations and taken into custody in Alexandria, VA. In a closed hearing on May 4th, Daniel's bond was revoked and he has been placed in conditions of solitary confinement, supposedly out of concern for mental health issues. Please check back here for more updates, and follow @JesselynRadack on Twitter.

Stop the War on Whistleblowers

Daniel is one of at least eight alleged media sources to be criminally prosecuted — and the fifth to be charged under the Espionage Act — during the Trump administration. And this was the first such case to be sentenced under the Biden administration.

Trump’s Department of Justice built upon the Obama administration’s notorious War on Whistleblowers, taking an already draconian effort to the next level. The Justice Department made every effort to prosecute leaks even more aggressively, reopening old cases (including Daniel’s), and even creating a dedicated FBI counterintelligence unit to hunt down leakers. They placed government employees under increasingly heavy surveillance, with the intention of clamping down on their First Amendment right to free speech. The Trump administration obtained lengthier prison sentences for whistleblowers than any previous president.

Transparency and civil liberties advocates and members of Congress have called on the Biden administration to change course and to consider clemency for these cases, but so far we have seen little evidence of any change in policy. 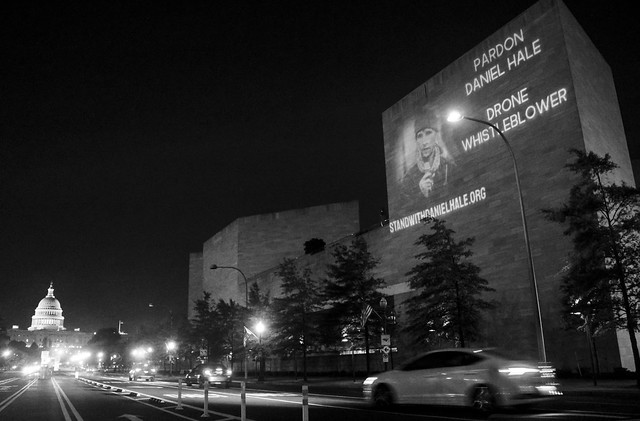 Ex-Intelligence Analyst Is Sentenced for Leaking to a Reporter

Daniel Hale Sentenced to 45 Months in Prison for Drone Leak

Daniel Hale exposed the machinery of America’s clandestine warfare. Why did no one seem to care?

Snowden: Daniel Hale is one of the most consequential whistleblowers - he sacrificed everything

Truth, Dissent, & the Legacy of Daniel Ellsberg: A 50th Anniversary Conference Commemorating the Release of the Pentagon Papers

Daniel Hale Blew the Whistle on the US’s Illegal Drone Program. He’s a Hero, Not a Criminal.

Leakers May Be Worse Than Spies, Gov’t Says

'Unbelievable': Snowden Calls Out Media for Failing to Press US Politicians on Inconsistent Support of Whistleblowers

The Trump Administration Is Using the Full Power of the U.S. Surveillance State Against Whistleblowers

The Espionage Act and a Growing Threat to Press Freedom

He Helped Reveal How U.S. Drone Strikes Were Killing Innocents. The Feds Just Charged Him With Espionage.

A whistleblower, Daniel Hale, was just sentenced to almost four years in prison for exposing America's illegal campaign of drone killings in Yemen. None of the people who actually ran the program have been punished – they've all been rewarded.

Daniel Hale, one of the great American Whistleblowers, was just moments ago sentenced to four years in prison. His crime was telling this truth: 90% of those killed by US drones are bystanders, not the intended targets.

He should have been given a medal. https://t.co/3i4IbkrfI3

Leaks to press in the public interest shouldn't be prosecuted under the Espionage Act. Period.

Daniel Hale helped the public learn about a lethal program that never should have been kept secret. He should be thanked, not sentenced as a spy. https://t.co/hpBzQnhJUT

Daniel Hale was charged under the Espionage Act for the "crime" of exposing the classified fact that nearly 90% of those the government kills via drone are innocents and bystanders. 90%.

This week the government is forbidding Daniel Hale from defending himself before his jury. Those who pretend national security whistleblowers face prosecution and fair trials, rather than persecution by a broken system, must be confronted with the facts. https://t.co/kOQ8ByjNSQ